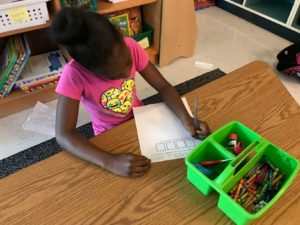 Apparently this is the only picture taken during this math lesson. That’s unfortunate because it was one of the best lessons we’ve had all year. Students were thinking deeply about place value and numbers.

The goal was to use digits from one through nine to create a four-digit number. The challenge was that each digit could only be used once. (You might quickly be able to say the largest number you can make is 9,876 and the smallest number you can make is 1,234, but that is because you have a deep understanding of how numbers work.) Explaining thinking added to the challenge. Sometimes we know something intuitively but we can’t explain why. In order to use that knowledge to build more complex understandings, it helps to be able to explain it.

Problems like this are called Open Middle Problems. If you are interested, you can learn more about them here.

This entry was posted in Uncategorized. Bookmark the permalink.